Compared to the other detectors, the iProtect 1216 RF detector comes with higher sensitivity to the 3G, Wi-Fi, and Bluetooth bugging device and with an adjustable alarm threshold. Compared specifically to the Protect 1206i detector, iProtect 1216, among other features, also has a 3-band detection, which means that there are 3 parts of frequency range: 50-700 MHz, 700 MHz – 3 GHz, and 3-12 GHz. In addition to that, it also has 3 working modes: silent, audio, and alarm.
Furthermore, compared to other detectors, iProtect 1216 has a clearer and more understandable user interface, making the device easier to use.
Compatible with ODA-4 antenna particularly on the Band 1 (<700 MHz). This range is of importance when detecting or receiving the following signals: VHF, UHF, and ISM 315 & 433 MHz bands.
Learn more about complete counter-surveillance equipment available at SpyShopEurope.com.
Find all Digiscan Labs products at this link.

iProtect 1216 has the frequency range divided into 3 parts that are displayed by a separate bargraph: "VHF/UHF 50-700 MHz", "Mobile and wireless 700 MHz – 3 GHz" and "Microwave and wireless 3-12 GHz". That allows better signal detection and detects several signals at the same time.

One of the bands is the "microwave" band that covers the 3-12 GHz frequency range. This band detects Wi-Fi and other wireless protocols operating at 5 GHz and on any higher frequencies. These frequencies are more covert because they are not detectable by common RF detectors.

With this feature is possible to reject background interference by adjusting the threshold. An alerting sound is produced by the device when a signal exceeds the alarm.

The histogram is shown when the device is in the ONE BAND display mode. It can draw the history of the signal obtained over the last 5 seconds.

Compared to the conventional RF detectors, the iProtect 1216 has a higher sensitivity to the 3G, Wi-Fi, and Bluetooth bugging devices. That is achieved with additional radio frequency paths.

Apple's AirTag uses RF signals and connects via Bluetooth, exactly what both this iProtect 1216 and the Protect 1206i can detect! You will be able to tell if someone's AirTag is in your proximity.

For additional information regarding the iProtect 1216 please carefully study the PDF files offered for download below. 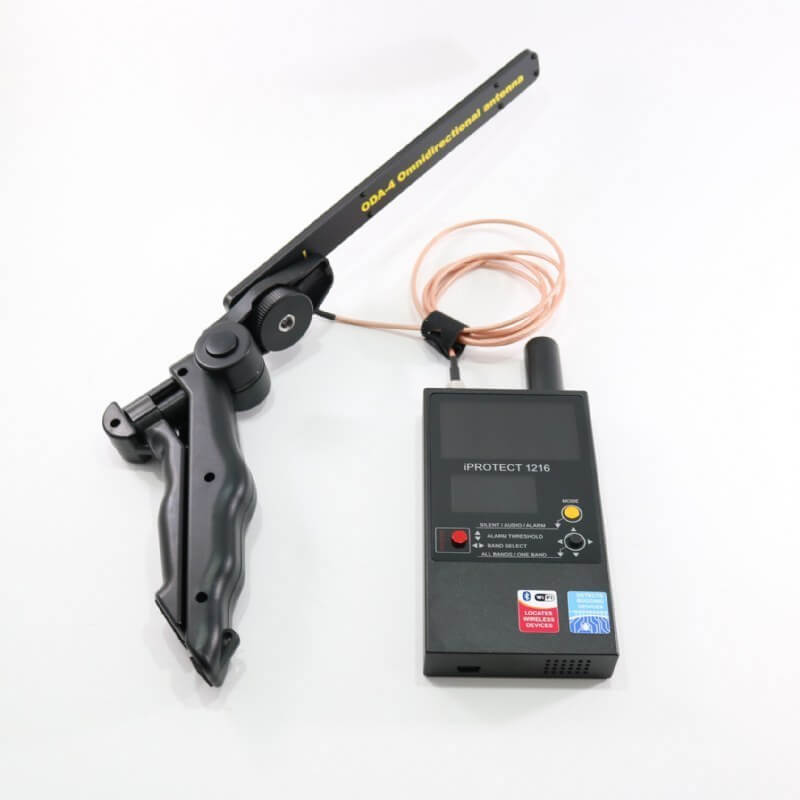